Part one of a series of interviews with the writers for the upcoming speculative fiction anthology, Clash of the Titles. The anthology is the brain child of Gil Bavel, who conceived of an endearing conceit: he would provide a list of titles and the members of his Facebook workshop, Writing the Short (SF) Story, would use the it as a starting point for a short speculative fiction story. 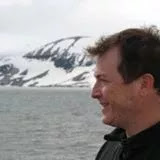 David Hoenig has contributed the story, “Bridge Out” to the Clash of the Titles anthology. The story explores the intersection where Neurology and Psychology meet, but when an experimental test run with psychedelic drugs, it not only changes the test subject’s life, but, also the lives of the research team, in ways they wouldn’t have dreamed of.

David credits his High School English teacher with inspiring him to become a writer. And, even though he decided on a medical career before he’d even started college (he majored in Biochemistry), his love for the written word compelled him to minor in English Writing.
David has been published widely in the medical literature sicne 1989, but only found his fiction voice in 2013 when he decided to begin writing his first novel (which is still in the revision phase). In the meantime he’s had several short stories published in a variety of venues, including Dark Chapter Press, Nonbinary Review/Zoetic Press, and Elder Signs Press.
I asked David a few questions about his writing career and, in particular, his participation in the upcoming anthology, Clash of the Titles.
Why do you think you are drawn to the Speculative/Science Fiction genre?


My mom fed me while watching the original Star Trek on its first TV run, and my dad never failed to feed me sci fi and fantasy books as I grew up. I think it’s because I always felt that if you were going to escape into fiction, you might as well do it in a forward-thinking, imaginative, and generally positive view of humanity’s future.

What authors influence you as a writer. Who is your favorite?


There are waaaay too many to name, so I’ll list a few across many genres who have been influential in my life and writing style: Isaac Asimov, Piers Anthony, Arthur C. Clarke, Ursula Leguin, Elizabeth Moon, Jacquelin Carey, Stephen King, Stephen Baxter, Charles Stross, Patricia McKillop, and Robert B. Parker.

How did you find out about the anthology, Clash of the Titles?


I was directed to the Facebook community by a writer friend whom I’d met through another publication.

What made you want to submit to it? Would you do it again?


Are you kidding? I mean, the chance to have editor work with you, giving actual critique to help make the story the best it can be and not just rejecting your work out of hand for the nebulous and unhelpful reason ‘it didn’t fit’ is a pearl of great price.

How did you come up with your story? What made you choose that title?


I’d had this idea for exploring the next generation of powerful MRI scanners, and how such a powerful magnetic field might affect the brain in terms of what potentials it could bring out. When I saw ‘Bridge Out”, my mind didn’t see a bridge which had been damaged–instead, it went to the wordplay ‘Einstein-Rosen bridge, and from there I knew I could create a character who would make a ‘bridge’ and head ‘out’ there. The rest wrote itself after research into neuroscience and neuropsychiatry.

How is your story for the anthology the same and/or different from your other works?


It’s similar in that my stories are most often character-based, and different in that my original concept of a dark ending morphed into what I think is more sublime with elements of redemption. I do enjoy a nice dark ending, and this one, with Gil’s guidance, went to a less easy, more rich conclusion.

A lot has been said about the workshop process wherein the editor takes a video meeting with the writers to help offer instant feedback and share the editing process along the way. How did you find this process; what are your feelings about it?


It was quite the challenge to schedule mutually available times given the busyness of our lives, and yet it’s been great. Getting another set of eyes on my stories is always something extremely helpful–getting it from someone with a professional writing background in an effort to make the story better and better is an unparalleled opportunity. It’s especially confidence boosting as well.

What do you think is the most important thing that readers know about Clash of the Titles?


This is going to be a fun read, because the titles inspire and inform the stories, but the stories will not be predictable based on the title. In addition to loving dark endings, I love me a bit of literary misdirection.


It’s said that the editor will make an anthology every year. Even if the “I pick the titles, you write the story” conceit isn’t used again, would you work with the editor again? Why or why not?


Absolutely. Gil’s put a lot of energy and time into the actual process for this anthology, and the stories, if you will, have been honed and honed. I doubt that I will ever reach a point when I will feel that what I’ve written can’t be made better with editing. His commitment to the process itself is laudable, and the final product should be awesome.

What do you think is the most important thing for booksellers, libraries and other outlets to know about Clash of the Titles that they don’t know?


To beat a metaphor to near-death, I’d say that the dialogue between writer and editor to grow the best story provided very fertile ground and the sweetest fruit.

Would you recommend the process to other writers; how did you find working with this editor to be compared to others?


I’ve been fortunate to find some wonderful editors in my fledgling writing career, and the support of an editor who helps you craft a good story, poem, essay cannot be underestimated.  Also, the whole process of discussing your thoughts, rationale, reasons for word choice, and then getting feedback to validate or critique is hugely worthwhile.  I’d absolutely work with Gil again, and with any editor that gives of their time to help writers bring their best story to print.

Did your story grow in ways you didn’t expect due to the workshop nature of the process? How?


Definitely. The ending in particular. My original vision for the finale was dark; death, doom, dismay, and madness.  Discussion with Gil resulted in the possibility of seeking redemption for the character who did ‘the bad thing’. Initially I resisted the suggestion, but it became a welcome challenge when I realized that my character’s intelligence had changed but not her degree of empathy: wouldn’t it be something if her empathy caught up, finally, to the initial intelligence ‘upgrade’ she underwent.  And with that, I realized that I could twist the trope a bit to provide a more fulfilling end than just the incredible danger from too-rapid intelligence growth untempered by a conscience.  In short, it was very cool.

What other projects are you working on, besides Clash of the Titles.


Probably the most all-encompassing project I’m involved with right now is the project of me: becoming as time-efficient as possible to satisfy my various ambitions of being the best husband and surgeon and medical educator I can be, and still evolve as a writer.

As far as writing projects, I’m currently revising my original scifi novel, am in the middle of a fun novel fusing cosmic horror to the noir detective story, and am lurching from deadline to deadline for a number of short stories ranging from horror, to sci fi, to cyberpunk. And, like the song says, “loving every minute of it”.